West Papua province of Indonesia is a great destination for visitors who like watching butterflies. There are a lot of places which tourists can visit to see them. I have prepared an itinerary for visitors as described below:

Tour participants should organize their trip to Manokwari city. We will meet you at the airport and organize your trip to higher elevation forest of Arfak mountains. There, you will be able to watch such butterflies as Ornithoptera titonus, Ornithoptera paradisea, Taenaris schoenbergi kenricki, Neptis sp. and a lot more. 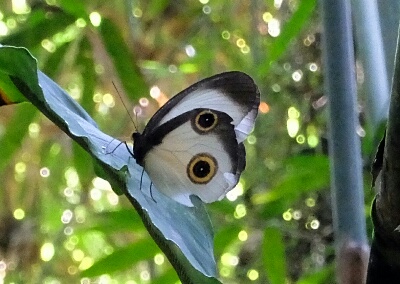 We shall continue our trip by going down to lower montane forest to look for such butterflies as Cruiser butterfly, Silky Owl butterfly, Ulysses butterfly and etc.

Fly to Sorong and transfer to Waigeo island. We explore the forest edge to see its butterflies such as Idea Durvillei, Graphium Agramemnon and etc.

Birding and Wildlife Watching in Sulawesi Island of Indonesia

From 1 to 12 August 2022 I (12 days nature tour in Sulawesi) had the opportunity to accompany 1 tour leader from Canada and 6 birdwatchers from the USA on a birding tour across Sulawesi island of Indonesia. They were sent by a well known birding company - Rockjumper - whose local tour was organized by VIT Tours. The tour leader was Adam Walleyn. Bahar and I helped them as guides from VIT tours. There were also local guides in each birding sites who supported us during the tour.

I flew by Lion Air to Hasanuddin airport of Makassar and then stayed at Dalton - a hotel near the airport. There were Glossy Swiftlet and Sooty headed Bulbul flying and sitting on trees in front of the parking lot of the hotel.

The next morning, I met the birdwatchers and their tour leader at the lobby of the hotel. we began our trip from Makassar city - the capital of the Province of South Sulawesi. We went by cars to Malino town - a highland region of the province. On the way, near a rice field, we stopped to watch water birds. Pied Stilt, Cattle Egret, Javan Pond Heron and Wood Sandpiper were seen eating worms or other water creatures. Several hours later, we arrived at Celebes hotel of Malino. 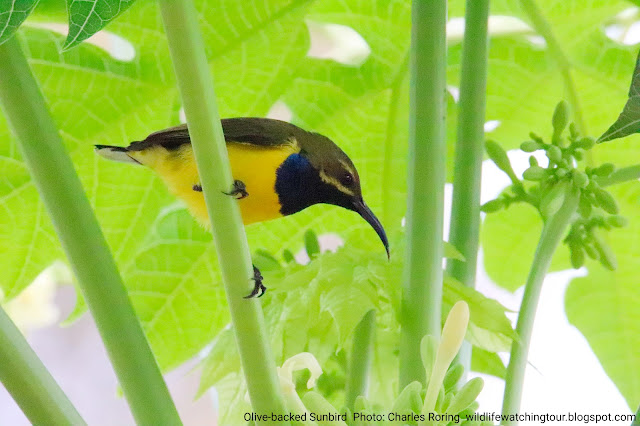 After lunch and 1 hour 30 minutes rest, We started birding again, this time from the parking lot of the hotel. There were high trees in the area. We saw Lemon-bellied White Eye, Mountain Tailorbird, Sulawesi Myzomela, Olive-backed Sunbird, Short-tailed Starling. We continued our activity that late afternoon to Biroro forest in higher region of Malino. There we saw Lompobattang Leafwarbler, Crimson-crowned Flowerpecker, Turquoise Warbling Flycather, Citrine Canary Flycatcher, Common Kingfisher, Olive-backed Sunbird, and Spotted Harrier.  Returning to the hotel, we had delicious dinner and then took a rest in the cool air of the town. We woke-up early in the next morning and then went by cars to the same place. This time we went hiking to higher elevation forest which was called Hutan Parangmaha. We spent half day exploring its ridge. There we saw Sulawesi Fantail, Sulphur-bellied Whistler, Turquoise Warbling Flycather, Sulawesi Brush Cuckoo, Mountain Tailorbird, and Bay Coucal. The Lompobattang Flycather that we were looking for and calling did not show up.

We continued the next morning to Karaenta forest where we watched White-necked Myna, Yellow-billed Malkoha, Pale-Blue Monarch, Sulawesi Cuckoo Dove, Brown-throated Sunbird, Sulawesi Babbler, Black-ringed White Eye. We were waiting for Black-headed Kingfisher but he did not come out of his hiding site. We had roadside breakfast in Karaenta. And then continued our trip again to airport. At a rest area of Karaenta we stopped for a while to watch birds again. There were a couple of Sulawesi Serpent Eagle soaring in the sky. We also saw Moor Macaque monkeys sitting on the roadside waiting for people in the passing cars to throw food to them. However, there are informational boards provided by conservation office of South Sulawesi province that advice passers by not to feed wild animals especially birds. 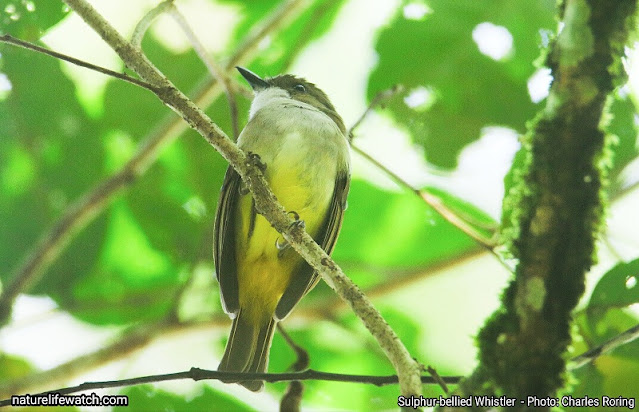 We flew to Palu city and arrived at around 16:00 local time. There was not enough time to go birding that day. We continued our trip by car to Wuasa village in Napu valley passing through Palolo valley and Lore Lindu National Park. We had a short stop near Palolo where I took a picture of Blue-tailed Bee Eater. It had been dark when we arrived at National inn of the Wuasa village.

After spending 3 nights in Lore Lindu and its surrounding areas, we continued our tour to the Province of North Sulawesi. We flew by Lion Air to Makassar and then to Sam Ratulangie airport of Manado. From this city, we had an overland trip by car to Kotamobagu town. At Maruasei rest area, we saw Oriental Darter flying high in the sky and White-eyed Drongo sitting on the branch of a tree. Our main target in Tambun was to watch Maleo. The Tapak Kolintang forest was a great birding site as well. We were successful in watching various species of birds including Grey-cheaked Green Pigeon, Red-bellied Pitta, White-necked Myna, Black-naped Oriole, Ivory-backed Woodswallow, Barred Rail, Maroon-chinned Fruit Dove, Slender-billed Crow, Blue-backed Parrot, Grey-sided Flowerpecker, Sulawesi Black Pigeon which was also called White-faced Cuckoo Dove and a lot of other birds as well.

In Tangkoko, Temboan Hill, and Naun River, we enjoyed another productive birding experience where we watched a lot of birds. Some of them were Lilac-cheeked Kingfisher, Ashy Woodpecker, Red-backed Thrush, White-rumped Cukooshrike, Pacific Reef Heron and Lesser-crested Tern, Spot-tailed Goshawk.

On 12 August, I left Manado for Makassar and then returned to Manokwari by Lion Air. I still enjoyed a short birding walk at the park of the Sam Ratulangi airport where I saw Chestnut Munia, Scaly-breasted Munia, Sooty-headed Bulbul, and Spotted Dove. The birding group continued their tour to Ternate and Halmahera.

If you are interested in taking a birding tour in Sulawesi island of Indonesia and want me to organize your trip, please, contact me by whatsapp to: +6281332245180 or by email to: peace4wp@gmail.com. This trip report was written by Charles Roring - a tourist guide in Indonesia.