Cendrawasih bay in West Papua province of Indonesia is a great destination for snorkeling visitors who want to see various species of marine creatures that live in coral reef. There are hundreds of coral reef sites which visitors can explore. The ones that have got pristine and beautiful coral reef are located in Wondama regency.

As a tourist guide, I organize snorkeling adventure tours to several different places in West Papua province of Indonesia. One of them is to Wasior town. This is the economic  hub of Wondama regency. This is a great destination for marine lovers. Snorkeling to this regency can be organized in an Island-Hopping method.
Roon island is a beautiful place for visitors who want to enjoy snorkeling. There are traditional fishing villages in the island where visitors can visit and stay. The nearby Rariyau and Manuop islands have got beautiful coral reef that is teeming with rich marine life.
Crossing the sea to the west, visitors will be able to see Rumberpon island that is the entrance gate to Purup Karst. There are small kiosks in Yembekiri village for visitors to buy snacks and mineral water. Soughwepu village is at other side of the straight that separates the Rumberpon island and the mainland.  Before visiting the Karst, visitors need to request permission from chief in Yomakan village.
Traveling further to the north, visitors will be able to see hot stream in Roswar island. It is too hot and too dangerous for the visitors to swim in it.
First, visitors need to fly from their country to Jakarta or Denpasar city of Indonesia. Second, they need to fly to Manokwari city. I will met and organize their trip to Wondama regency. 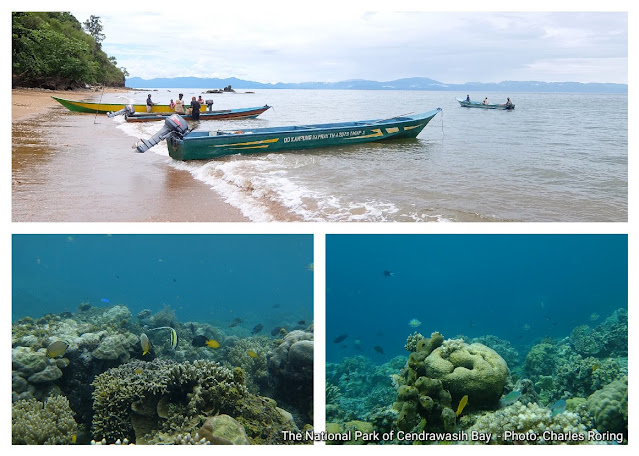 Wondama regency is a great destination for snorkeling tours. It has got hundreds of small and big islands which are surrounded by coral reef. Butterflyfish, angelfish, anemonefish, spadefish, damselfish, snappers, jacks, anthias, turtles, parrotfish are some of the many fishes which visitors can see while swimming over the coral reef of Wondama.

The duration of the tour is usually 1 week. To share the cost, visitors can travel in a group of 4 to 6 people.

Three important coral reef sites in Bird's Head Seascape that have got high marine biodiversity include Cendrawasih Bay, Triton Bay and Raja Ampat. There are a lot of islands in these regions where tourists can go to enjoy swimming and snorkeling. I personally have visited them.

However, my recent visits were mostly in Cendrawasih Bay. I enjoyed snorkeling over the coral reef of Wasior town, Menarbu village, Yoop island and Purup islands. They were very beautiful. Reef fish such as parrotfish, surgeonfish, grouper, and anemonefish can be seen everywhere. I also visited Rariyau which was an uninhabited island. The seascape was fantastic. It was around 10 minutes by motorized boat from Yende village in Roon island.

Today, visitors can travel to Cendrawasih bay easily. First, they need to fly from their country to Jakarta, Surabaya, or Denpasar city of Indonesia. After that, they can continue their trip by taking domestic flight to Manokwari city. Airlines such as Sriwijaya Air, Lion and Batik Air offer regular flights to Manokwari from major cities in Indonesia. So, there is flight to Manokwari every day.  From Manokwari, visitors can go by ferry boat or by airplane to Wasior town.

There are small hotels, inns and homestays in Wasior town which visitors can choose to stay. Boats to islands in the bay are also available. Because Wasior is the economic hub of Wondama regency, visitors can buy various kinds of things in the town from clothing, fishing equipment to fruits and vegetables, biscuits and mineral water.
If you are an avid snorkelers, please, bring your own snorkeling device. It is important to have snorkeling mask that is perfectly fit onto your face.
Because Wondama regency has not been fully developed as tourist destination, visitors will not find luxurious resorts in remote beaches such as in Maldives, Wakatobi or Bali. Only traditional fishing villages that are scattered in many islands of Wondama regency.

Bringing a waterproof underwater camera is also important because it will allow you to take beautiful underwater pictures of fish and coral reef.

Snorkeling adventure tour can be organized to this region. The trip usually lasts for at least 4 days covering many important coral reef sites of Wondama regency.

The trip can be combined with hiking tour through the forest to see tropical birds such as parrots, cockatoos, pigeons, and kingfishers. The number of participants can be as low as 2 people to as high as six people. Pristine rainforest can be seen in Wondiboy mountains which is the habitat of birds, mammals, insects and reptiles. Camping in the forest can be organized for visitors who want to study the complex ecosystem of rainforest. There are many small streams in Wondiboy where visitors can use as their base to build basecamp.

If you are interested in taking a snorkeling adventure tour to Cendrawasih Bay, please, contact me (Charles Roring) by whatsapp to: +6281332245180 or by email to: peace4wp@gmail.com.

Indonesia is a country that is in the center of coral triangle. It is also located between the Pacific Ocean and Indian Ocean. The coral reef in Indonesia has got the highest marine biodiversity in the world. Raja Ampat, Triton Bay and Cendrawasih Bay National Park in West Papua province, as well as Wakatobi and Bunaken National Park of Indonesia, attract the attention of people from around the world to explore its beauty and wealth of its marine creatures. 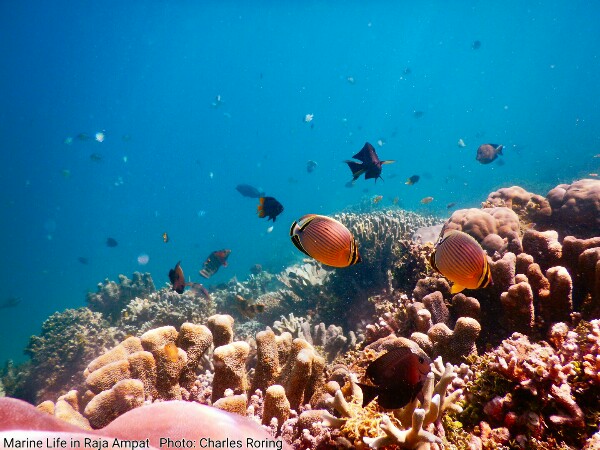 They come as marine biologists, recreational scuba divers, or just as ordinary visitors who like to walk and swim at white sandy beaches of Indonesia. Coral reef has now become a tourist attraction. Actually this is an additional pressure to coral reef environment.

Birds Head Seascape also has got huge area of mangrove forest. These precious marine environment can be considered as fish factory. The plants along the coast provide food, construction materials and herbal medicines to the indigenous people who live in remote islands. They are not able to have quick access modern health clinics and hospitals in cities such as Sorong and Manokwari. They mostly depend on herbs from coastal plants around their villages.

For islanders in remote islands, coral reef is seen as their source of livelihood. They go there to catch fish, shrimp, and collect sea cucumber and seashells that have got high economic value.

Unfortunately, coral reef is being massively destroyed by human whether we realize it or not. Our use of plastic bags, wrappings, and bottles and chemical substances is increasing every year. They become wastes that are harmful to the environment. Sea turtles eat the transparent plastic wrappings as if they are jellyfish. There are still a lot of factories that dump their chemical wastes into the river or the sea. They kill tiny organisms that live in coral reef. A lot of cities and towns still do not have proper sewage water treatment systems. Dirty and toxic water continues to pollute our seas. This happens globally. In other waters marine pollution is world wide problem.

The exploitation of natural resources in coral reef has to be regulated so that it will not cause any damages to the precious marine environment.  Coral reef has to be preserved. Coral reef plays very important role in our environment. There are a lot of species of filter feeding animals in coral reef. Some of them include Snake Sea Cucumber (Synapta maculata), Christmas Tree Worm (Spirobranchus giganteus), clams, krill, sea cucumber, small fishes and even some sharks. They clean the seawater making it crystal clear and healthier for all living organisms in the sea.

Zooxanthellae algae performs photosynthesis that produce oxygen and food for marine animals in the coral reef. In other words coral reef is the rainforest.

A well managed marine protected area can preserve coral reef and at the same time bring prosperity to local people who live in this fragile marine environment.

Aimas is the capital of Sorong regency. It is located around 30 minutes to the southeast direction from Sorong city. There are a lot of farmlands around Aimas. Farmers produce various kinds of food materials both to Sorong city and Aimas. Therefore, it is not surprising to see that there are a lot of eating houses in Aimas. Most of the menus that are offered to visitors are tasty Indonesian cuisines. There is grilled mujair fish that is offered with stir-fried kangkung, fresh basil vegetables and chilli sauce. There is also grilled chicken that is offered with sliced tomato, soy sauce, fresh basil leaves and chilli sauce.
Visitors can also try seafood in many eating houses around Aimas. Visitors who are interested in trying the delicious Indonesian cuisines in West Papua can go to Aimas town.
There are hotels, lodges and homestays in Aimas town that provide affordable accommodation for anyone who wants to stay there for a few days while exploring the farmlands of Sorong regency.
If you are interested in visiting Aimas town of Sorong regency and need a guide to accompany you, please, contact me (Charles Roring) by whatsapp to: +6281332245180.
at June 06, 2022 No comments: