This is the view of Arfak mountains taken from Rendani airport of Manokwari city. The mountains have been an important destination for visitors who like to see rainforest with its unique tropical plants and animals.

The rainforest is also the natural habitat of various kinds of insects, reptiles and mammals. I have guided tourists to the forest since 2010. During the day, when we walk, we see birds, butterflies, cassowary, and snakes. At night, we can see nocturnal animals such as cuscus possum, bandicoot and forest dragon lizard.
There is a basecamp where we put dome tents, mattresses, cooking and eating utensils in it. When I go there with tourists, we are accompanied by local people who own the forest. We stay for 3 to 4 days in dome tents  and do jungle tours to see the wildlife of the forest.
After that we can continue our adventure to another different place such as the higher elevation forest of Arfak range or to Sorong regency and Raja Ampat islands.
I usually combine the rainforest tour with swimming and snorkeling tour so that participants can see the biodiversity of plants and animals in the forest and coral reef.
If you are interested in traveling to Arfak mountains or enjoy snorkeling to see colorful tropical reef fish, you could contact me (Charles Roring) by e-mail to: peace4wp@gmail.com or by whatsapp to: +6281332245180.
at November 27, 2020 No comments:

Coral Reef in the Waters of Manokwari

Manokwari is the capital of Papua Barat province in Indonesia. It is a coastal city in West Papua. Because it is located near the equator, its beaches have got coral reef. I like swimming and snorkeling over this coral reef and take pictures of the marine life that can be seen there.

The ones that are far from the city are in very good condition teeming with fish, clams, and other marine animals. I usually do some freediving to a depth of 2 to 10 meters to take pictures of them. At these depths, sunlight can still reach the surface of the coral reef.

I use Nikon AW300 and Fujifilm XQ2 with its watercase to take underwater pictures and videos of the marine life. They are good enough for fish and reef identification works.

Because I am a tourist guide, I like to organize tours for visitors who like snorkeling. But it is not limited to Manokwari city and its surroundings. I also go to Tambrauw mountains, Sorong regency and Raja Ampat islands. Most of my tours last for around 2 weeks combining snorkeling, sightseeing along the coastal area as well as hiking, birdwatching and wildlife watching in tropical rainforest of West Papua. In general, I guide between 2 to 4 tourists. There are also solo traveling tourist whom I guide.

The tours to the beaches, and mountains of West Papua allow participant to see the biodiversity of plants and animals in coral reef and in the forest. They play a great role in maintaining the balance of our ecosystem and greatly support our life.

To visit Manokwari, visitors need to fly from their country to Jakarta - the capital of Indonesia. After that they can continue their trip by domestic airlines such as Garuda, Batik, Lion and Sriwijaya Air. The planes will land on Rendani airport of Manokwari which is only around 20 minutes from city center.

If you are interested in taking a holiday to Manokwari in 2021 with health protocol under new normal, you can contact me by email to: peace4wp@gmail.com or by whatsapp to: +6281332245180. I will be happy to prepare a customized itinerary for you.

Queen of the Night Flowers

I have just watched the blooming of Queen of the Night. These are beautiful flowers that bloom at night. The fragrant scent is similar to jasmine but mild.

I have seen a lot of flowers in tropical islands of Indonesia from the Queen of the Orchid (Grammatophyllum speciosum) to various kinds of hibiscus as well as Rhododendron.

For me, Queen of the Night or Bunga Wijaya Kusuma (its name in Indonesia) is a special flower. I am lucky to see them blooming.

Because the flowers emit fragrant scent, it has got the potential to be developed as essential oil. So, I do some searches on the internet about essential oil of the Queen of the Night. The result from Google searches show some companies that sell queen of the night. The scent of the oil can create a relaxing atmosphere to those who use it.

I offer birding vacation tour to North Sulawesi for visitors who like to watch tropical birds of Celebes island. This easy birwatching tour will include trip to a waterfall at the suburban area if the city, a trip to Doloduo for watching birds in Tambun Maleo Conservation area. Tangkoko Nature, Mount Mahawu and Sonder will also be visited.
During the tour, participant will watch Pale Blue Monarch, Sulawesi Hanging Parrot, Red-backed Thrush, Sulawesi Malkoha, Green-backed Kingfisher, Gross-beak Myna, Sahul Sunbird, Sooty-headed Bulbul, Ashy Woodpecker, Sulawesi Pygmy Woodpecker, Knobbed Hornbill, Sulawesi Hornbill, and a lot more.
After the birding tour to North Sulawesi, the trip can be extended to Raja Ampat islabds in West Papua for visitors to watch Red Bird of Paradise, Wilson's Bird of Paradise as well as other interesting avifauna of mainland New Guinea.
For more info about the itinerary and cost, please, contact me by email to: peace4wp@gmail.com or by whatsapp to: +6281332245180.
at November 25, 2020 No comments:

The world is in a major move to reduce its dependency on fossil fuel. Hydrogen is considered as the fuel of the future. This gas in its liquid form can be stored and used to power factories, cars, trucks, trains, ships, airplanes, and even aerospace rockets . Countries like Japan, Germany, France, the UK, Spain, South Korea, China, Australia, the USA and Russia, and a lot more are doing extensive research in finding the cheapest and safest way to produce and to store hydrogen.

Green hydrogen that is produced using renewable energies (i.e. solar, hydro, and wind power) are considered as the most suitable solution for an environmentally friendly society. But its cost is very high. Large scale offshore wind farms combined with other renewable energy resources through efficient electrolysis can lower the cost of hydrogen production. Still this process is considered more expensive than fossil fuel.

A Canadian company called Proton Technologies patented a new technique of producing hydrogen with cost that is much cheaper than fossil fuel. The first process will be started by injecting hot oxygen enhanced air into the ground to oxidize heavy hydrocarbons, coke and other gases. When the temperature reaches more than 500 degrees Celcius, the hydrocarbon and water will brake apart. The chemical term for this process is thermolysis. The second process is extracting the hydrogen using special filter or membrane that allow pure hydrogen gas to pass through it whereas CO2 and other gases will be left underground.  Other valuable gases such as steam for electrical generation, helium and syngas can also be extrated from the well. This very promising technology can revitalize depleted or abandoned oil wells to produce more affordable hydrogen that will drive the world economy now and in the very near future. Seeing its potential positive impact to the environment, the hydrogen extracting method of Proton Technologies will attract serious interest from countries that have got hydrocarbon deposits.

Several European countries have accelerated the construction of the offshore wind-farms.

As of today, steam reforming is considered as the cheapest method of hydrogen production. In this process, methane gas CH4, usually from natural gas or biogas, is reacted with steam (H2O) in very high temperature (around 1,000 degrees Celcius) to produce Hydrogen, and CO.

The Carbon Monoxide can then be used to react with water vapour to produce more hydrogen gas.

Hydrogen is the most abundant chemical element in the universe. However, in its pure form, hydrogen is highly flammable. For instance, a very small leakage in a fuel tank of a hydrogen-powered truck may drain the entire fuel or cause lethal explosion if there is fire, or sparks.

Birding at Sea and at the Beach of Raja Ampat Islands

Because Wilson's Bird of Paradise can only be found in deeper forest, we need to leave homestay early in the morning and did long morning walk to its display ground. My favorite site for watching this paradise bird was Zedekiah's forest located at the entrance area of Kabui bay. There is a very narrow beach where speed boat can land for tourists to go hiking up steep slopes, to the place of Wilson's Bird of Paradise. 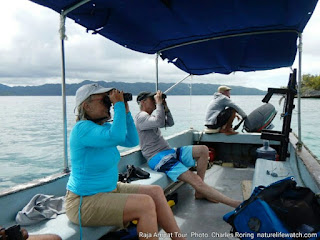 My favorite places for watching birds were the southern, eastern, and northern areas of Waigeo, Gam island, as well as karst in Kabui bay.  When traveling in the bay, we used a motorized outrigger boat, or speed boat. Sea and coastal birds could be seen at the beaches and in the sky including White-bellied Sea Eagle, Whimbrel, Radjah Shelduck, White-breasted Woodswallow, Eastern Osprey, tern, and a lot more.

In certain islets where we could find nice white sand beaches, I would ask boat driver to land on them. We could spend around 1 hour enjoying the beauty of the seascape and watch birds using spotting scope mounted on a tripod.

Raja Ampat had a lot of beautiful things for visitors to see both above and underwater. I really hope that the situation will be better in the near future so that government will allow foreign visitors to come to this country again.

The main gate to this tropical archipelago is Sorong city. Visitors can fly in from any major cities in Indonesia. Domestic airlines such as Garuda, Sriwijaya Air, Batik Air, Lion and Nam Air offer regular flights to Sorong. Arriving in DOMINE EDUARD OSOK airport, visitors still need to cross the sea by fast ferry boat to Waisai town. There are a lot of homestays and beach resorts which visitors can choose for staying in Raja Ampat for a few days. by Charles Roring

I have just uploaded a video of a male Magnificent Riflebird calling her female partner. I saw him in Malagufuk forest of Klasow valley. It was a lowland tropical jungle of Sorong regency.

This bird is one of the 42 species of Birds of Paradise known to science. It can be found in lowland and hill forest of New Guinea. The bird has got iridescent blue breast mostly black feather. The bird dances on a branch of a tree or vine to attract her female partner for mating.

To watch them visitors need binoculars, birding camera and a field guide book: Birds of New Guinea: including Bismarck Archipelago and Bougainville by Phil Gregory or another similar title Birds of New Guinea by Thane K. Pratt, et al.

The main gate to birding in West Papua is Manokwari city and Sorong city. There are tens of hotel which visitors can choose to stay for at least one night before continuing their trip deeper into the forest to watch birds in the villages. This is written by Charles Roring