Wooden Boats in the Dorey bay of Manokwari

Wooden boats, similar to modern seagoing steel ships, are used to transport goods and people from one port to another. In the Dorey bay of Manokwari city, I saw some traditional wooden boats in a small jetty in Anggrem area during my walking tour yesterday afternoon. The hull and superstructure of one of the boats are painted with white and yellow coatings. On the average, the boats are powered by 200 horse power marine diesel engine and conventional three or four blades propellers. I was able to climb its top deck and took some photos of other boats around the area. There was a steel ship belonged to the local government. I know that it has been used as ferry connecting small coastal villages in the northern region of Papua island. Although the boats were constructed using traditional tools, they are quite safe and stable to sail across the sea. 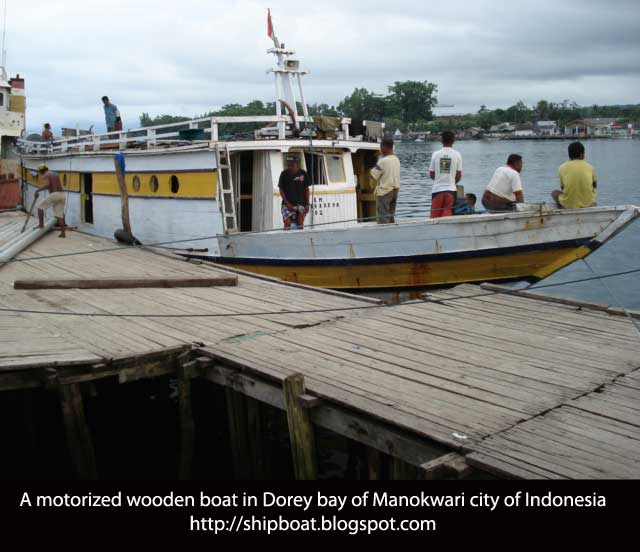 When we are talking about traditional wooden boats design and building in Papua, we cannot categorized them as cargo ships and passenger ships. The decks where cargoes are stored are also used to carry passengers. I am doubtful if the crews or operators of these boats provide life-jackets to all the passengers and crews on board.
I went there with a friend of mine. On the other side, I saw the former shipyard built by a Dutch shipbuilding company.  Formerly known as Manokwari Scheepswerf Konijnenburg. Now it is called Fasharkan (Fasilitas Pemeliharaan dan Perbaikan or the Facility for the Maintenance and Repair). I am sad to tell you that it not working anymore. The expensive slipway and the shipbuilding facilities left by the Dutch  are  not developed or operated by the Indonesian government anymore.
We talked with the some of crews of the boats. I asked them how much does it cost to go from Manokwari to Wasior. They said the ticket is Rp. 100,000 or around 11.3 US dollars. I requested this information because I want to get the exact ticket price for Wasior. a small town which now becomes the capital of Wondama Bay Regency. This regency has a large sea area which has been preserved by the government as the National Marine Park of Cendrawasih bay, one of the best coral reefs and scuba diving sites in the world.
From Wasior, tourists or scuba divers can hire another boat or small outrigger boats to continue their trip to Auri islands where they can do snorkeling and scuba diving there.
Most of the big islands of Indonesian archipelago have their own techniques in building traditional wooden boats. In Maluku, a small village that is famous for building boats is Asilulu. In North Sulawesi, villagers of Tanawangko are expert in building big boats that can carry up to one hundred passengers and several tons of cargoes. In South Sulawesi, we know famous names of Bulukumba or Tanjung Bira. People there are world class boat builders. This was written by Charles Roring.
at August 14, 2020