A Visit to Raimuti island in Manokwari Papua

Last January three Russian tourists visited Raimuti island. It was the smallest island in the Dorey bay of Manokwari Papua. These Russian tourists were Mikhail, Dima and Inga. They spent two weeks hiking around Table Mountain, the Mansinam island, and then they went snorkeling and fishing in the Raimuti island.
According to their opinion, Raimuti was a small but beautiful place. It was located near Arfai beach, only around two hundred meters from the main Papua land. There were some mangrove trees growing in the island. These vegetations helped prevent the island from erosion that could eliminate the whole island from Papua map.

Fortunately, not many people visits the island, that's why it still exists until now.
Raimuti has been used by fishermen as a resting place or as a place to find fish bait. 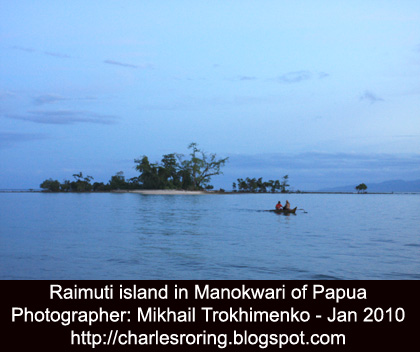 A friend of mine, an indigenous Papuan said that there is a sunken warplane wreck around the waters of the Raimuti island. Unfortunately, he did not mention the exact location of the planewreck. The island is also surrounded by coral reef which is an important habitat for fish and other marine creatures.
If you are interested in visiting the island, you can hire a boat that belongs to the fishermen at Arfai beach. Usually its cost is Rp. 100,000 per day. I suggest that you bargain to get the suitable price. Don't forget to bring your own gear if you want to scuba dive around Raimuti, Lemon, and Mansinam islands.