Indonesia is the largest archipelago in the world. It is also a natural paradise for birdwatchers who want to see great varieties of tropical birds. When I made a land tour across Seram island last June 2012, I saw a beautiful bird that had been captured by a Moluccan man. Its head was covered by purple and black feather whereas its wings were mostly green. Most of its body, bill and tail was red with some yellow stripe at his front neck or throat. The bus that was carrying me and other passengers stopped at a village in East Seram for a while to load rice. The man approached the bus and showed his pet. I immediately turned on my digital camera to make some pictures of the bird. I knew it was a lory but I was not able to identify it immediately. 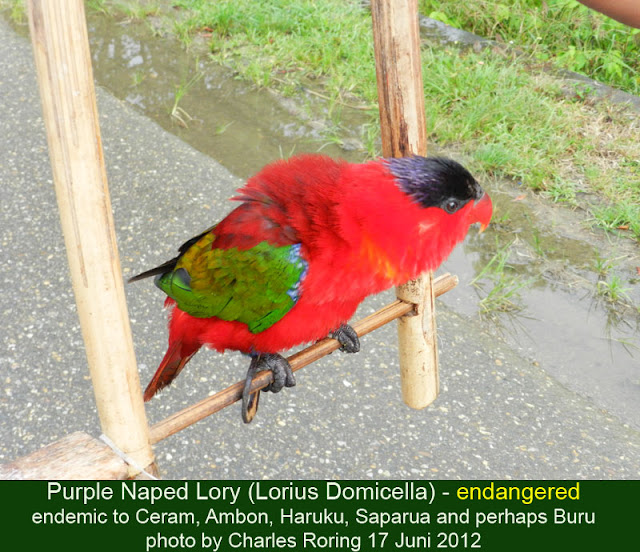 The next day when I arrived in Ambon, I took out my book Birds of New Guinea trying to identify it. I saw several species that look like it but I was not really sure so, I made a little research on the internet. Finally, I found its pictures on several birding websites and on wikipedia. The bird is called Purple Naped Lory (Lorius domicela). According to wikipedia it is now an endangered species. Along the way from the town of Bula to Ambon city, I saw extensive deforestation. Endless rows of sawit palm trees, rice fields and other commodity plants have replaced pristine tropical rainforest. In addition to agriculture and logging activities, the hunting and trading of birds in Indonesia seem to be a serious problem to this country. 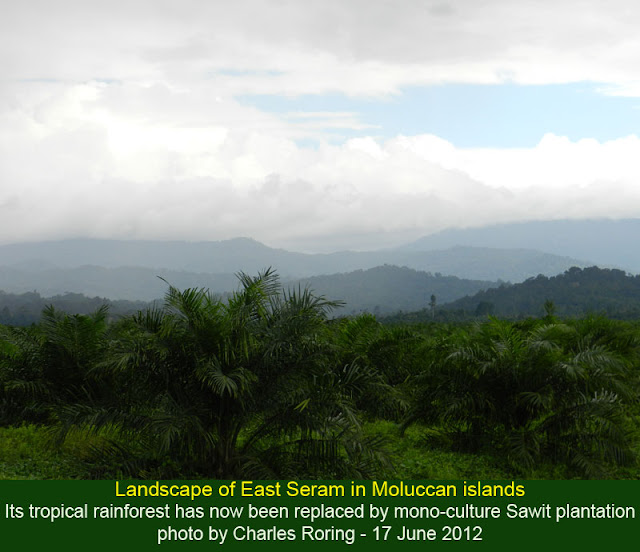 When in Ambon, I was interviewed by Rodi Fofid from menamoria.com, an online radio about eco-tourism and the preservation of tropical rainforest. I expressed my concerns about bird trading in Maluku islands particularly in Seram and how we could stop it through responsible tourism that provides alternative income generation to local people. I hope that I can provide birding tour for birdwatchers who want to see endemic birds in Maluku islands. If you are interested in taking a birdwatching trip in Seram and its surrounding islands, please contact me by e-mail to peace4wp@gmail.com. I will be happy to arrange a trip for you. by Charles Roring/ E-mail: peace4wp@gmail.com
Also read:
Ikan bakar di Ambon memang lezat
Hamparan Sawah di Seram Timur