MASTER OF WEAVING AND PLAITING

West Papua is not only famous of its Sarang Semut and Buah Merah medicines which many people now believe can cure various kinds of diseases. In 1858, Alfred Russel Wallace visited Manokwari (formerly known as Dorey bay) and admired that Papuans were very brilliant artists. In his report, The Malay Archipelago, he was astonished to see that their love of art had existed side by side with their "savage" civilization; tribal wars and cannibalism. 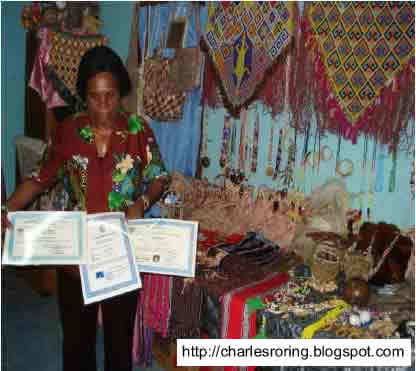 Today Papuans are fighting to survive in this 21st century. They pursue what the whole world pursue, modernism, yet the modernity doesn't change their life habit into individualism and capitalism. They still rely on communal relations, they still love art and struggling to preserve their cultural identity. 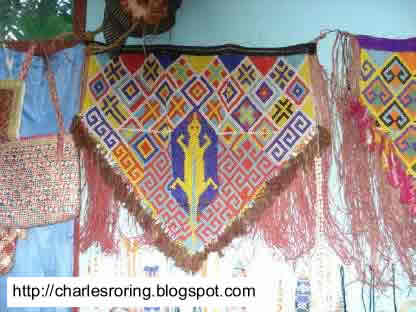 Just nine hours ago (29 June, 2007 at 17.30), I visited a Papuan artist whose talents are extraordinary. An expert in weaving, plaiting; and handicraft making. She started making and selling handicraft in order to raise her children, shortly after his husband died. He accidently fell off a ship into the sea around Sarmi regency in 1987. His body has never been found. Alone, she had to raise her three children, Daniel Fatie, Maria Fatie, and Annike Fatie. All of them have got married now giving her 11 grandchildren. Her name is Ms. Marice Fonataba. She began learning clothes weaving in 1985 from a Roman Catholic nun. It took six months to master it. 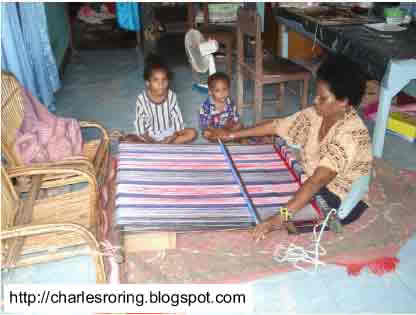 From her skillfull hands, traditional clothes with unique Papuan motifs have been created. Besides weaving, she also creates many artworks made of natural fibers, seashell, beads, barks, and animal skin.
Most of the materials can be obtain from the jungle several hundred meters behind her home. To make a skirt she needs thousands of small sized beads called manik-manik. Bigger beads are available in the nature. Interested in her talents and creativity, local government officials from such regencies as Jayapura, and Serui invited her to exhibit her products, and to give weaving lessons to Papuan girls. For her hard work they gave her reward letters.
Unfortunately, she cannot easily sell her products. She does not have a gallery. Actually she and other artists in Manokwari city have asked the local government to provide an art gallery in strategic location in the city harbour or airport. It costs a lot of money to build a gallery in that location. All of the traditional artists cannot affort to finance the project. Recently, a small art gallery has been opened by a migrant investor in Rendani airport but it is very far from her home. So, she only displays her products at home which is located some one hundred meters at the back of the Roman Catholic Church, Gereja Katedral St. Agustinus, Manokwari, .
Ms. Fonataba is originally from Serui, . The motifs of her artworks are mostly influenced by her tribe's motifs.
She also creates artworks with motifs from other tribes in the bird's head region. "Every tribe has her own motifs, we cannot mix them in one costume, for instance the wedding costume of Serui. As shown in the picture below, the bride wears an ornamented skirt called Sireo. When her family wants to escort her for the first time to her bridegrooms's home, the bride will wear it. "It takes six months to make the Sireo," Ms. Fonataba said. In the past, people made it of beads produced by certain plants but now they use thousands of smaller beads. These manufactured beads are sold by shops in the downtown. The bride will wrap her upper body with a piece of Kain Timor (traditional cloth weaved from natural fiber). She also wears manik-manik necklace and decorates her head with a dried paradise bird.
For the bridegroom, he wears an ornamented headband also made of beads called Wehus. The cloth consists grades i.e., Toba, Bokek and Sarim.They are used as dowry. The most valued one is Toba. The most valued Toba is the ones whom the Papuan got from Portuguese traders hundreds of years ago long before Indonesian and the Dutch came to . It is also used by people when they want to settle many Adat cases. When somebody killed someone. He or she will have to pay the fine with Toba cloth. It is not clear how many pieces he/ she has to pay. The fine is not only the Toba but also some other things such as money, pigs and etc. The value of the cloth depends on the number of mata (rows of ornaments in the cloth). Usually, there are at least three matas. For the current price, one mata equals to one million rupiahs. If there are 15 matas, the price of the Toba cloth will be 15 million rupiahs. On the girl's arms, there are two sea shell bracelets. This was written by Charles Roring

Description:
Picture 1: Ms. Marice Fonataba was showing rewards for her achievements in promoting Papuan handicrafts from local governments. Unfortunately, they only gave this widow papers instead of an art gallery.

Picture 2: Sireo (meaning: wear it), is a traditional skirt of Papuan girl of Ambai tribe in Serui island. It is made of thousands of small beads and needs six months to make.

Picture 3: Ms. Marice Fonataba, sitting on the floor together with her grandchildren, was weaving the traditional Papuan cloth.

Picture 4: The Wedding Costume of Ambai tribe, Serui West Papua. It can also be considered as a grandeur costume which is used in traditional official occasions.

Contact:
Ms. Marice Fonataba Mobile Phone: 0852 328 402 95
If you visit or know someone who wants to visit Manokwari,
please, don't forget to drop by at her address located behind the Catholic church:

Email ThisBlogThis!Share to TwitterShare to FacebookShare to Pinterest
Labels: art