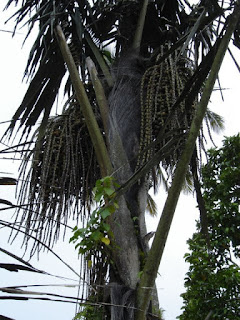 Aren tree (arenga pinnata) is the highest in terms of bio-ethanol production compared to other plants such as sugarcane, wheat, rice, cassava, and banana. Aren is also called Saguer tree in Minahasa, the Province of North Sulawesi, Indonesia. It is a kind of palm which is similar to Sawit and Coconut trees. While I was travelling around Sonder village, I could take a picture of Aren tree between two coconut trees. Aren or Saguer has more leaves. Its color is also darker than coconut. There are approximately two million Aren trees in Minahasa. If all of them are productive, their sap can produce 876,000 kilo litres of bio-ethanol. Traditionally, the sap from Aren has been used in the production of alcoholic drinks by the villagers in Minahasa; Borneo; Java, Papua New Guinea, Malaysia, Fiji, and other islands in the Pacific. The sapping method is significantly different among tribes.

The sap is tapped from male inflourescence spadix twice a day, usually in the morning and in the afternoon before dark. The highest tapping is obtained during the full-moon period. Villagers don't tap the sap from female spadix due to its inferior quality.

One Aren tree can produce between 1 and 20 liters of sap/day. Ten percent of it, after fermentation and distillation, will be converted into bio-ethanol. According to Indonesian Science Agency - LIPI, one hectare of land can accomodate from 75 to 100 trees. On the average, one hectare of Aren trees produces 1,000 liters of sap a day which is equivalent to 100 liters of bio-ethanol. It means that the amount of bio-ethanol produced from one hectace of land is 36,000 liters/ year. This figure is higher than sugarcane.
A number of companies have constructed bio-ethanol distillaries in Indonesia. One of them is located in Motoling, South Minahasa, Indonesia. Its production capacity is 1.5 metric ton of 99.5% bio-ethanol/day. Indonesia is seriously developing its bio-fuel and renewable energy resources after becoming net-importer of oil. This year alone, Indonesia has quit from its membership in OPEC. The soaring oil price in the world market creates more burden to national budget due to the fuel subsidy. This unfavorable situation forced the government to reduce the subsidy by raising the fuel price. Such policy creates massive street protests nationwide, food price hikes and instability in the country.
It is hoped that the production of bio-ethanol from Aren or Saguer trees, sugarcane, cassava will help poor farmers in getting higher income thus improving their economy.
at July 18, 2020