Most people think that sharks are dangerous animals. Yes, it is true. But, there are sharks that are not dangerous such as walking shark (also called wobbegong). Well, I personally used to swim in the coral reef area of Raja Ampat where I saw black tip sharks. They are not dangerous as long as we don't provoke an attack to the fish.
Whaleshark Watching
There is also another species of fish called whaleshark (Rhincodon typus). This fish is not dangerous to human being because it eats small bait fish called ikan puri. In recent years, swimming or snorkeling with whaleshark has been a favorite tourist attraction particularly in Cendrawasih bay and Bitsyari bay of West Papua. Unfortunately, tourists swim too close to the fish. To respect this marine animal, tourists should not swim in front of its mouth. Whaleshark needs free movement in the water so that it can feed on the fish.
If you are curious about how big the fish is, please, have a look at the following vector illustration which I made using Inkscape. 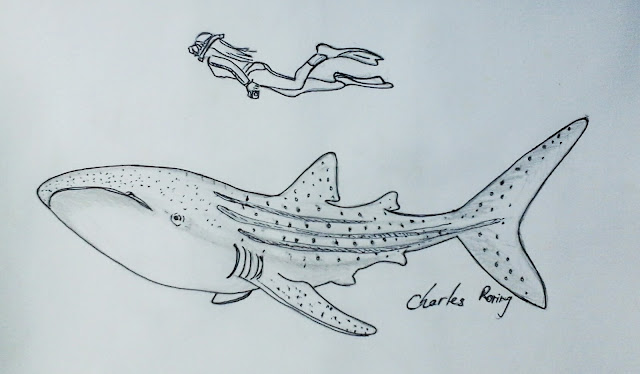 Vector Art
This vector graphic drawing is available on various products manufactured by zazzle at this link: whaleshark products.
I also created the drawing to raise awareness among all of us about the importance of preserving marine environment by reducing the use of plastics. When we are at sea, we often see used plastic totebag, diapers, and bottles floating on the surface of the water. A lot of fish have died after eating them which they thought as fish or jellyfish.