I have seen Red-cheeked parrots both male and female through binoculars and spotting scopes a lot of times. But it was in Klasow Valley when for the first time I was able to take pictures of the birds in relatively closer distance. The birds were eating the bark of a tree. I thought that the bird only ate fruits and grains. It's a weird behavior, actually. Compared to Eclectus Parrot, Red-cheeked Parrot was much smaller.
I saw the parrot when I organized a birdwatching tour for visitors of Rockjumper. We went to Klasow valley in Sorong regency of West Papua. The lowland rainforest of the valley is the natural habitat of Lesser Bird of Paradise, King Bird of Paradise, Magnificent Riflebird, Black Lory and Northern Cassowary. We only spent one night in the forest but we saw significant number of birds including Moustached Tree Swift, Golden Myna, Yellow-faced Myna, Nankeen Night Heron (which was a migrant bird), Boyer's Cuckoo-shrike, Coconut Lorikeet, Azure Kingfisher, Lowland Peltop, and a lot more. This was written by Charles Roring
at June 04, 2020

Email ThisBlogThis!Share to TwitterShare to FacebookShare to Pinterest
Labels: parrot

Doves and Pigeons in Rainforest of West Papua

Before the covid pandemic reached Indonesia, I frequently guided visitors to watch birds and wild animals in rainforest. We traveled across ... 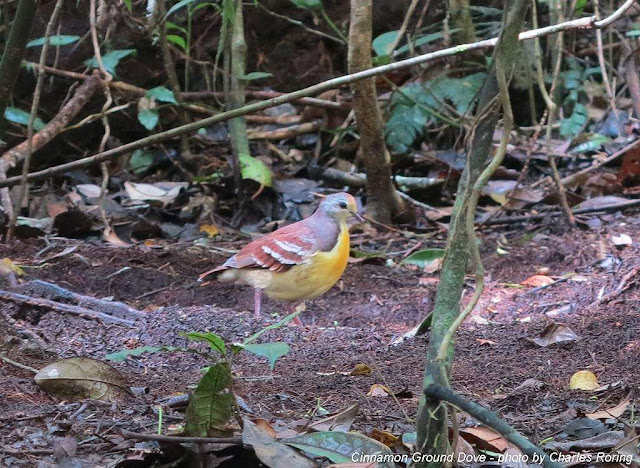