I and my friends visited Kofiau islands early this week. We went there by speed boat from Misool islands. It was a nice adventure because we could get the opportunity to see a lot of tropical islands in the southern region of Raja Ampat.
In late September, strong wind from east and south covered the region. This generated big waves that were dangerous for small boats.

The speedboat that carried us from Misool had engine problems at sea when we entered the waters of Distrik Kepulauan Sembilan (District of Nine Islands). Boat crew tried to repaired it when we were at sea. Unfortunately, it did not work. With one outboard engine that was still working, we landed at Wejim island. We took lunch and had some coconut fruits, and waited for the crew to repair the engine. Because they could not repair it, we decided to move to Wejim village. There, we asked helped from villagers. There was one who had the sparepart of the engine. We had to spend one night in Wejim sleeping at the house of the village chief.
Early the next morning, we continued our trip to Deer village in the western region of Kofiau. During our stay there, I gave training to villagers on how to organize a birding tour. Some birding tour companies had visited Kofiau. So, the villagers were quite familiar with this type of tourism.
There were two birds that were endemic to Kofiau, i.e.  Kofiau Paradise Kingfisher and Kofiau Monarch. The Latin name of Kofiau Monarch was Symposiachrus julianae. It was given to the bird in honor of Queen Juliana of the Netherlands. It was interesting to find that such a small bird bears the name of a European queen. In IUCN Status, the bird was put in the status of Vulnerable due to its very limited range and decreasing population. I hope that birding tourism could help local people preserve rainforest and protect their land and marine environment.
The tropical islands of Kofiau were covered by very nice coral reef. So, fishing, snorkeling, birdwatching, island hopping, rainforest tours, village visits are the recommended tourism activities for visitors who want to go to Kofiau. There was another group of islands located in the west of Kofiau. Its name was Boo islands. Unfortunately, due to its remote location, I had not been able to visit them.
After spending several days in Kofiau, we returned to Yelu village by speedboat and then to Sorong the next day.
If you are interested in traveling to Raja Ampat, please, contact me by email to: peace4wp@gmail.com or by whatsapp to: +6281332245180.
at September 28, 2019

Email ThisBlogThis!Share to TwitterShare to FacebookShare to Pinterest
Labels: Kofiau

Snorkeling in Kabui Bay of Raja Ampat Raja Ampat has become my favorite destination when I guide visitors on various snorkeling tours in the... 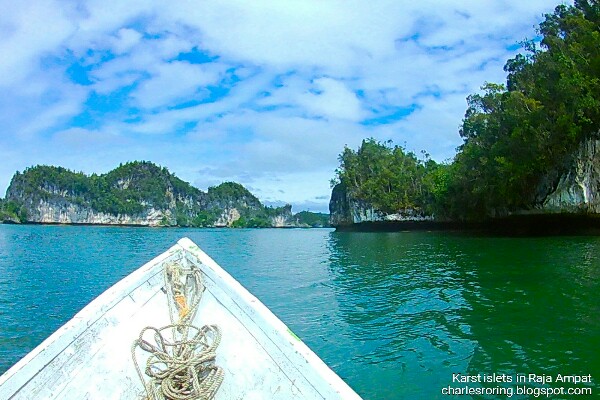