After guiding a German tourist named Katja in Raimuti island where we enjoyed snorkeling over coral reef, I accompanied her back to Manokwari city. It was approximately 2 p.m. We took a chance to visit Niko Asaribab - a Papuan artist who lived near Anggrem harbor. Most of his works were wooden carvings. There was a painting of underwater world that showed coral reef and tropical fish.
After spending half an hour with the artist, we continued our trip to the harbor. There were several wooden boats parking at the jetty. There were a pile of Cement Tonasa not far from where we were standing. The sun was shining fully with clear sky. The surrounding atmosphere was really hot. And I saw a porter was carrying cement on his back walking towards a boat. There was a sack of cement on the wooden jetty. Perhaps it fell while being carried by one of the porters. 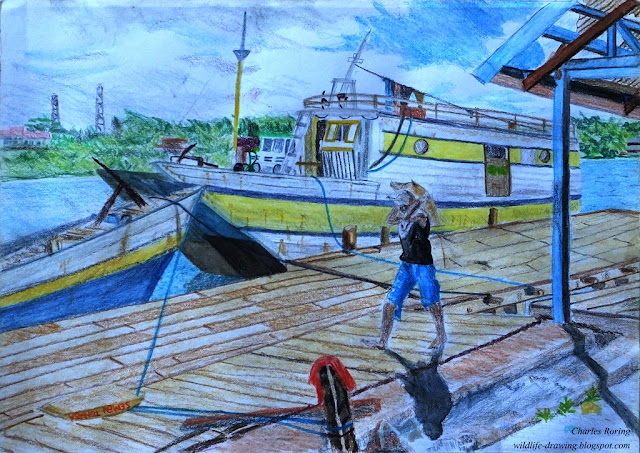 I made a colored pencil drawing about the mid-day scene of the Anggrem harbor. It was a modest harbor. Several years later, the people's harbor has been changed into a concrete jetty with concrete construction and paving block floor. I heard that it was inaugurated by Jokowi - President of Indonesia last year.
Now the modest look of the people's harbor has disappeared. At least, I did a small drawing of the old harbor as a souvenir.
Please, support this blog by buying my artworks below: 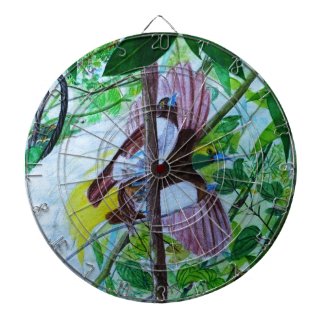 Paradise Birds in Watercolor Dart Board
by tropicalart 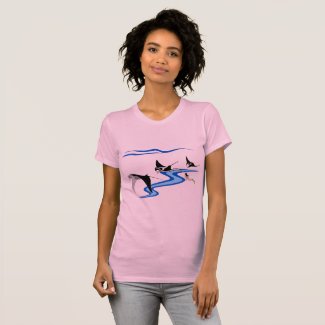 Email ThisBlogThis!Share to TwitterShare to FacebookShare to Pinterest
Labels: Boat